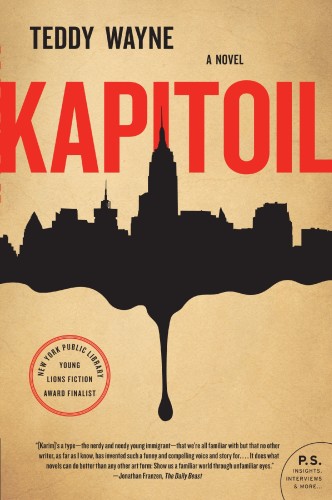 “Sometimes you do not truly observe something until you study it in reverse,” writes Karim Issar upon arrival to New York City from Qatar in 1999. Fluent in numbers, logic, and business jargon yet often baffled by human connection, the young financial wizard soon creates a computer program named Kapitoil that predicts oil futures and reaps record profits for his company.

At first an introspective loner adrift in New York’s social scenes, he anchors himself to his legendary boss Derek Schrub and Rebecca, a sensitive, disillusioned colleague. Her influence, and his father’s disapproval of Karim’s Americanization, cause him to question the moral implications of Kapitoil. Karim is an unforgettable protagonist, and Teddy Wayne’s hilarious, charming, and tender novel is one of the most critically acclaimed debuts in years.

Foreign editions of Kapitoil are currently available in the UK, France, and Spain.

Excerpts are available at Electric Literature and The Awl.

“[Karim]’s a type—the nerdy and needy young immigrant—that we’re all familiar with but that no other writer, as far as I know, has invented such a funny and compelling voice and story for…it does what novels can do better than any other art form: Show us a familiar world through unfamiliar eyes.”
—Jonathan Franzen, The Daily Beast

“Teddy Wayne has written one of the best novels of my generation…Why did 9/11 happen, and why do we continue to respond so blindly? Wayne answers these questions better than Mohsin Hamid or Joseph O’Neill, the best authors of this genre until now…Wayne has completely foreseen and transcended the exhaustion of the 9/11 genre.”
—The Boston Globe

“The Whiting judges took delight in Mr. Wayne’s ‘sleight of hand, the intelligence behind the voice, its perfect pitch.'”
—The Mrs. Giles Whiting Foundation

“Every once in a while, you encounter a character in a work of fiction who feels like such a real person, such a friend, that once you finish the book, you miss having him around. Karim Issar, the protagonist of Teddy Wayne’s captivating debut novel Kapitoil, is such a character…his voice makes the book a standout…Wayne has given us a character to adore and a book that leaves us feeling, as Karim might say, greatly enhanced.”
—Barnes and Noble Review

“Flat out top-notch. Kapitoil makes you see America and the English language more clearly than ever before, and Karim Issar, the book’s protagonist, is one of the most interesting characters we’ve had a chance to spend time with.”
—McSweeney’s

“This wonderfully assured debut novel, at once poignant, insightful, and funny, details Karim’s passage through a new world of corporate sharks, Manhattan clubs, museums, Bob Dylan lyrics, and personal growth. Karim’s English, always grammatically correct but stilted with terms from science, mathematics, computing, and business, is a delight. Best of all, however, is simply being inside Karim’s head as he ponders Jackson Pollock’s paintings, baseball, programming, and the mysteries of love and life in the U.S.”
—

“Wayne’s strong and heartfelt debut novel…zips through a minefield of potential clichés and comes out unscathed, striking a balance of humor and keen insight that propels the story through Karim’s education about the West’s ethics and its capitalism, while in the background the World Trade Center looms. It’s a slick first novel thatbeautifully captures a time that, in retrospect, seems tragically naïve.”
—

“I speak in awe of Krol and Wayne, two of the greatest writers of our time, whose books will far outlast the moment. As a fiction writer I am flabbergasted by what they’ve both accomplished. Callisto and Kapitoil are immense and unrepeatable…these two books—especially Kapitoil—are so good, so unimaginably good, that one fails to see what more can be done with the genre.”
—The Huffington Post

“With the possible exception of Kurt Vonnegut’s dystopian Player Piano, I can think of no debut novel that has more engaged and enthralled me than Teddy Wayne’s offering.”
—The Jewish Chronicle (UK)

“Wayne’s first novel is a book ripe with beauty and potential…and a flawlessly developed first-person voice. Karim Issar is a character readers will remember, and readers had better prepare themselves to remember the name of Teddy Wayne as well. It’s one they’ll be hearing again and again in the months following Kapitoil’s release.”
—BOMB

“A startlingly funny, intelligent and poignant pre-9/11 novel that one can only read with a post-9/11 sensibility…With his clever prose and simultaneously romantic and skeptical viewpoint, Teddy Wayne is undoubtedly an exciting new voice on the scene—and Kapitoil is a book that is not to be missed.”
—BookPage

“Because Wayne regularly contributes humor and journalism to magazines such as The New Yorker, it makes sense that he captures the city with compelling and sometimes humorous detail. What’s surprising is how well he integrates those details into a broader fictional narrative—one with significant emotional heft.”
—Time Out New York

“Kapitoil is set before 9/11, but its depiction of the reckless excess that lies behind our current debacle groups it with Adam Haslett’s Union Atlantic and Jonathan Dee’s The Privileges…an unusually enjoyable experience.”
—The Independent (UK)

“While set in the world of high-finance computer nerdom, it’s actually a thoughtful, moving (and painfully funny) love story.”
—The Daily Beast

“A hilarious, touching delight…This is a uniquely amusing novel about oil (novels about oil don’t grow on trees), and presents an endearing and comedic hero. Any City reader worth their salt should enjoy it hugely.”
—City A.M. (UK)

“Teddy Wayne’s novel Kapitoil succeeds on so many levels, it’s hard to believe the book is his debut.”
—Largehearted Boy

“The narrator, Karim Issar, is a rare and immensely appealing bundle of brainpower and cluelessness…Teddy Wayne gets it. A smart insider, he lets a wide-eyed outsider deliver this fresh take on American finance and culture. Kapitoil is just plain fun to read.”
—The Oregonian

“Teddy Wayne like James Joyce plays with the grammatical infelicities of the English language in his engaging first novel, Kapitoil…this novel—set before 2001—is about a more innocent time…A time when a brilliant and rather funny and lovable character like Karim could be more fully appreciated in both life and literature.”
—Review of Contemporary Fiction

“It’s Issar’s use of language that’s the most intriguing element of this book…he’s a wonderful character.”
—ZDNet UK

“Kapitoil is one of those uncommon novels that really is novel. Though the storytelling is conventional, it is satisfyingly so, and the book’s estimable young narrator is a human type whom nobody until Wayne was ever inspired to write about.”
—Jonathan Franzen, author of Freedom and The Corrections

“Teddy Wayne has written a brilliant book. Karim Issar is one of the freshest, funniest heroes I’ve come across in a long time, and thanks to his often excruciating adventures—financial, romantic, linguistic, and otherwise—we start to see America with Karim’s weird and wonderful clarity. In its honesty, humor, intelligence, and hard-won wisdom, Kapitoil is ‘Karim-esque’ to the nth degree, and that is a very good way to be.”
—Ben Fountain, author of Brief Encounters with Che Guevara

“An innovative and incisive meditation on the wages of corporate greed, the fundamental darkness of Kapitoil‘s vision is lit by the author’s great comic intelligence and wit.”
—Kathryn Davis, author of The Thin Place

“What a wonderful character Karim is—the hapless, hilarious, math-obsessed hero of Teddy Wayne’s first novel.Kapitoil is a delight. Who knew oil futures could be such fun?”
—Joshua Henkin, author of Matrimony